The Valero Energy Corporation began as a small regional oil refiner in the American southwest. Today, it is an industry leader, setting high standards for corporate responsibility and environmental sensitivity. 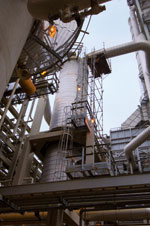 Valero Energy Corporation, based in San Antonio, Texas, has enjoyed phenomenal success. Since 1981, the company has become North America’s largest refiner, growing from a single refinery to a network of 18 facilities.

This strong performance is the result of a strategic assessment of the refining industry that Valero made in 1996 when the company concluded that the refining cycle was at a bottom. Valero believed that historically-low refining margins would improve as global demand continued to expand and as the worldwide movement toward cleaner fuels tightened the supply of refining products.

This analysis turned out to be the right call, and today Valero is a leading producer of premium, environmentally-clean products, including reformulated gasoline, California Air Resources Board (CARB) Phase II gasoline, low-sulphur diesel and oxygenates. These products and many others are sold in Valero’s more than 5,500 retail and branded wholesale sites – a network that stretches from the U.S. West Coast to the East Coast and from Canada to the Caribbean.

Perhaps most notably, Valero has continued to emphasize safety and environmental responsibility at the same time it has aggressively expanded. Of 149 refineries in the United States, Valero has 11 of only 23 refineries certified by the Occupational Safety and Health Administration (OSHA) as VPP Star Sites, a designation reserved for America’s premier examples of industrial safety.

Valero is also the only refiner to win the Governor’s Award for Environmental Excellence in Texas, and it remains on track to reduce greenhouse gas emissions by nearly two million US tons per year by 2008.

Equally noteworthy is Valero’s strong commitment to its 22,000 employees and the company’s belief that those employees represent its number one asset. This statement is not empty rhetoric. In 2006, Valero ranked No.3 on Fortune magazine’s list of the “100 Best U.S. Companies to Work For.” Valero is also committed to being a good corporate citizen. For instance, it has twice won the Spirit of America award, the United Way’s top national honour given to the company that best exemplifies the spirit of charity and community service.

As Valero has grown, its energy challenges have kept pace. At a typical refinery, energy costs represent about 50 per cent of operating expenses, and Valero’s operations are no exception to that general rule.

“We’re always looking for ways of bringing down those costs,” says Javier Quintana, Valero’s technology director for Reforming/ Isomerisation and BTX. “As part of that process, we’re assessing all of the various facilities we’ve acquired over the years. In many cases, the previous owners lacked the resources to make the best use of these refineries, and they need upgrades to make them more energy efficient.”

Heat exchangers represent a particularly important area of interest for Valero since what cannot be recovered from process-to-process heat exchange must be supplied by increased heating. By allowing the thermal heat generated during refinery operations to be re-used, heat exchangers help to reduce fuel costs, lower the life cycle costs of processing units and lessen atmospheric emissions.

“Traditionally heat exchange has been performed through shell-and-tube exchangers, but these systems have significant limitations,” explains Darryl Seillier, Valero’s director of Energy Technology and Development. “Typically, shell-and-tube heat exchangers are bulky and inefficient, requiring multiple units to achieve a very limited temperature crossover. Their size and inherent design also make them difficult and time-consuming to clean.”

This need for improved heat exchange technology has led to a strong and growing relationship with Alfa Laval. For Valero, a particular attraction is Alfa Laval’s speciality heat exchanger technologies, which maximize energy recovery by offering thermal efficiencies well above traditional industry standards.

Alfa Laval Packinox, designed for refinery applications.The relationship between the two companies started several years ago when Valero first adopted Alfa Laval Packinox technology for use in its catalytic reformers. In these processing units, naphtha is transformed into high octane gasoline at temperatures above 900°F (482°C). Without high-efficiency heat recovery, these units would be very large users of energy, and Packinox has been a key enabler in Valero’s drive to lower operating costs at its plants.

Wider cooperation between Alfa Laval and Valero began in 2005 when Seillier decided to learn more about the applicability of Alfa Laval’s Compabloc and Spiral heat exchangers for other refinery processes.

Throughout the following year, several opportunities for energy recovery were analysed, coupling Valero’s refinery knowledge with Alfa Laval’s expertise in high-performance heat transfer. The results showed that very promising gains could be achieved when Alfa Laval technologies were integrated into a number of refinery processes. These applications range from simple processes to feed heat recovery to integrated systems for crude oil preheating trains.

In keeping with the developing trend in the refining industry, Valero is also counting on enhanced energy efficiency to help reduce atmospheric emissions at its refineries. Packinox and Compabloc are particularly well suited to recycle more waste heat directly back into process heat, thereby reducing the need to rely on burning fuel at process heaters. In turn, the reduced firing at these heaters cuts down stack emissions, enabling Packinox and Compabloc to help reduce emissions “at the source.”

“We’re very cognizant of the relationship between energy efficiency and emissions release,” says Seillier. “Firing at the heater creates incremental heat we cannot recover and increases carbon dioxide emissions. On average, every million BTU of natural gas we burn produces 116 pounds of greenhouse gas in the form of CO2.”

Currently, Valero is using three Packinox and several Compabloc and spiral exchangers for heat recovery at its refineries, with several more projects in the early stages of development.

The drive for excellence

Valero’s approach to vendors has evolved over the years, reaching a critical turning point about five years ago when the company bought Ultramar Diamond Shamrock Corp., a major oil refining and marketing company with over USD 2.5 billion in revenue and more than 6,000 employees. As a result of that acquisition, Valero needed to become more centralized in its use of resources and to take a more consistent approach to managing technology to achieve greater energy efficiency. In particular, that meant making a concerted effort to establish practices that would enable Valero to get the best results from each of its facilities.

“We hold our suppliers to extremely high standards, and we’re constantly challenging them to come up with innovative new solutions that can maximize the flexibility of our feed operations and throughput while helping us to control costs,” says Quintana. “Alfa Laval is the type of supplier we like to work with. Over the years, they have been very responsive to our needs. We especially appreciate their willingness to help us explore potential, hypothetical applications that can improve our best practices.”

“Above all else, we want candour,” says Seillier. “We can’t afford major mistakes, so we need to be very careful before putting a heat exchanger into service. Suppliers should be willing to share the breadth of their industry experience with us and honestly tell us whether a particular product is a good application for our purpose.

“We don’t want them to just sell us a product,” he adds. “We want them to work with us to find a solution. I am pleased to say that Alfa Laval has continually met our expectations. It’s one of their strengths and a major reason the relationship between our two companies continues to be so strong.”

Energy is essential for many refinery operations and can account for as much as 50 per cent of a refinery’s total operating costs.

This energy is not only expensive – burning it has a huge environmental impact, fuelling concerns about greenhouse gas emissions.

“The need to rein in energy use has formed the basis of our relationship with Valero,” says Francois Reverdy with Alfa Laval Packinox Market Unit Refining. “Our all-welded plate-type heat exchangers designs are easy to integrate into demanding refinery environments and have a proven record of boosting processing efficiency and product value. They also reduce installation and operating costs.”

“Alfa Laval brings expertise and value to the process,” says Javier Quintana, Valero’s technology director, Reforming/Isomerisation/ BTX. “They’re very open and direct, offering us a range of services, from reviews of existing heat exchanger performance and maintenance procedures to helping us make sure we’re getting the best performance and flexibility from new equipment and processes.”

“Most of my involvement with Alfa Laval is in process development, and our relationship has been very productive,” adds Darryl Seillier, Valero’s director of Energy Technology and Development. “They help us decide if projects are economically viable and even share software to help us analyze equipment and decide whether it will work with our applications.”

Spiral heat exchangers are particularly suited to cool fouling bottom fractions such as FCC bottoms, as well as to recover heat between fouling fluids as seen in the visbreaker feed/effluent application. The spiral heat exchangers ensure that heat recovery benefits are not lost due to fouling.